Amphibious Zoo Music is known as a world leader in sound quality and creativity. We work with an incredible base of composers, producers and engineers and can accommodate any musical style or preference from contemporary electronic genres to live recorded, full orchestra. With facilities worldwide there is no limit to your creativity and our leading and demure team promise to deliver exactly what you need. With experience spanning several decades and cuts across all broadcasting leaders worldwide, our ability to deliver on every custom music project is a promise as strong as our reputation.
Versions of
–
:
By Kerstin February 19, 2019 in AZ Videos, Our Team

“I’m a jack of all trades, master of none, but highly proficient in some, haha! I compose, produce, arrange, orchestrate, record, mix, sound design, and do production audio. I’m pretty much fascinated by all aspects of sound.”

J Scott Rakozy wears a lot of hats in the music/audio world. But there are a few core values that persist across anything and everything he does; commitment to his craft, thoroughness in his projects, and the fact that he is absolutely in love with his work.

Putting all the professional labels and work titles aside, Rakozy is a gamer and we’re not talking about a casual gamer riding the Fortnite wave. Gaming is a fundamental aspect of Rakozy’s life, and he credits it for turning him towards a career in music.

“I started playing the piano at 3, was enrolled into piano lessons at 5 and studied classical music for 7 years, but I loathed classical music the entire time because I wanted to play stuff I enjoyed. And then the Nintendo64 came into my life, haha! When I’d be playing games like Perfect Dark, Banjo-Kazooie, Ocarina of Time, Majora’s Mask, to name a few, I was immersed in the worlds and the constant that always remained in those games was the music.

“There was a pivotal moment where I distinctly knew that music was the direction I wanted to go in for a career. It was when I bought my first PlayStation2 and got Metal Gear Solid 2. The opening credits theme by Harry Gregson-Williams inspired me so greatly because he had found a way to bring Hollywood-level music to a video game franchise. An action-packed espionage game with a Hollywood-class score greatly convinced me that [music] was the direction I needed to go in.”

Even in his work today, Rakozy turns to his gaming roots for inspiration.

“Man, I listen to a LOT of video game soundtracks. When I need a high-octane, adrenaline-filled score, sure I could listen to the Metal Gear Solid V soundtrack, or I can just play it to experience what’s happening in the music at specific moments in the game. Or if I need to get a grasp on a minimalistic score, I could listen to The Last of Us soundtrack, or I can just play the game and experience elements used in the various sceneries the game has. I can invest 2 hours in a movie and might get some musical ideas out of it OR I can invest 10, 30, or 250 hours in a game and be fully immersed in the environment, listening to every little nuance of music that comes and goes throughout the game.”

His enthusiasm transfers over into his creative process, sometimes creating 5 or 6 full-fledged initial music drafts for a single project.

“This helps in three ways. No. 1 - it helps me to write fast and efficiently. No. 2 - it helps me understand what the client is leaning towards and helps take the guess work out of the picture. I can then put all my focus and energy into that one song to adjust and tweak to the client’s needs. And No. 3 - I have 4 or 5 other songs just lying around that I can keep, put them in other music libraries, or use them as references for another project in a similar vein. So anyway, that’s a pretty good habit to get into when working with clients. Always overachieve!”

Rakozy’s positive attitude and clear love for his work continue to create opportunities and successes. Recently one of his Darwin tracks “Soul” was licensed by both Neutrogena and Johnson & Johnson for national campaigns. Go to his Soundcloud and website to find out more about J Scott Rakozy. 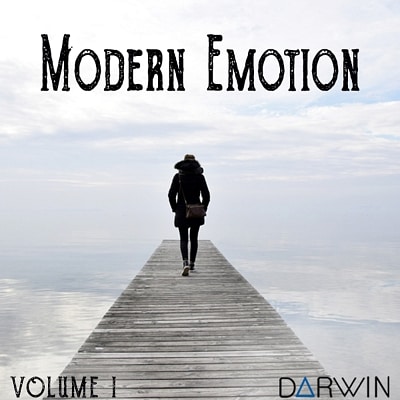 A collection perfect for modern filmmakers who want something relevant and hip that will inspire and motivate. Each piece of music is deeply emotional but never in a way that is manipulative or treacly.